Who is coming for our jobs? Fear of job redundancy, workforce replacement and being competitive with cheaper labor is often what first comes to mind when thinking of job loss. However, the question should not be who is coming for our jobs, but what? Without stirring the pot, or fear-mongering, there is clear evidence of a robotic and autonomous workforce that has already begun an infiltration in the industrial workspaces. The red flags for robots coming for jobs have been assuaged by the idea that we are in a skilled workforce shortage with fewer people going into the trades than ever before. Despite robots working in ways that humans can’t compete such as: working long hours, not getting sick, or not missing work for family reasons, there are ways for humans to compete with robots in terms of efficiency, accuracy, and safety.

No longer science fiction cyborgs
Machines in factories and automated production lines, replace strenuous manual work, and can seamlessly integrate into the digital systems in the facility, keeping track of inventory, packing, and production. With the human worker needing to compete for speed, accuracy and have an internet of things (IoT) connection, manufacturing sites worldwide have begun creating cyborgs. Well not in the traditional sense, but facilities are using smart glasses and other wearables to keep their workers competitive, valuable and in work. Although it may seem like we are creating Robocop (1987) or a Six Million Dollar Man (1973), the smart glass assistance is more like the glasses that are shown in movies like Kingsman (2014 & 2017) where the spies have access to text and visual information, documentation, video sharing, and integration into their other computer systems. You don’t need to be a spy to get these smart devices; with over 250 established customers worldwide already using smart glasses with [Ubimax software solutions] (https://www.ubimax.com/en/) for industrial processes, you won’t be the first person to try it. Already an established answer to enhancing the workforce, wearable solutions are the future and a part of the rapidly expanding Industry 4.0.

The enhanced and augmented workforce
Through using head-mounted displays or smart glasses, workers have a hands-free advantage to receive [step-by-step prompts for assembly, inspections or order picking] (https://www.ubimax.com/en/solutions/). All in their field of vision workers can read digitally transferred information, pictures, and videos to help them in their tasks. This helps to train new staff and bring them up to the skilled level quicker, it also helps skilled workers to guide less experienced ones through remote support call with interactive video sharing. The knowledge transfer can be done from different locations, saving time and money for facilities. Troubleshooting, or documentation can be done through video and photo recording, as well as voice to text notes. All the information scanned and documented while wearing smart devices can be uploaded to the main computer for future reports. By using wearables, and hands-free visual aids workers are augmented to be a better version of themselves.

In the video below you can see an example of how Ubimax solutions keep workers competitive. 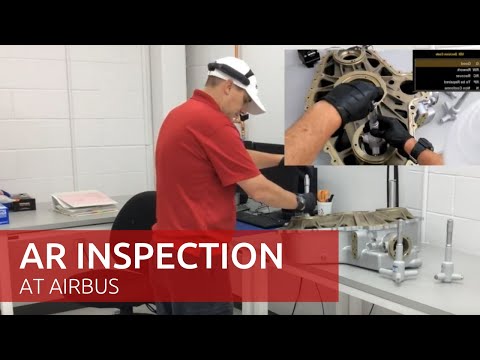 Keeping ahead of the game
Through utilizing a wearable computer, workers keep themselves indispensable, and competitive to their robot counterparts. Human workers will always have certain cognitive possibilities that their robot peers will not, such as intuition. Augmenting our workforces is necessary for keeping our humans employed, and our business successful. Through incorporating human workers with the digital realm, companies will find that their cyborg staff is not only productive but happy for job security and the chance to use some cool new tech.

https://www.industr.com/en/collaborative-robots-sharing-workspace-alongside-humans-2372262  https://www.forbes.com/sites/sarahchamberlain/2019/08/21/addressing-the-skilled-labor-shortage-in-america/#6051b643181d  https://www.theatlantic.com/technology/archive/2017/10/cyborg-future-artificial-intelligence/543882/  https://www.imdb.com/title/tt2802144/
This website uses cookies and requires third party services for operation. Are you consent to use the following services? Google Analytics, Google Tag Manager, and Mailchimp.
Please take a look in our data privacy section for further information. Not agreeing will limit functionalities of this website.
Okay No